There ought to be a right royal rumpus over this one. The people who run the Bath and Wells showground have signed up with a developer to set their cash registers jangling. Hang on a second, the Royal Bath and West is meant to be a charity. Nevertheless they now want to build two hotels, a huge shopping centre, several dozen holiday chalets, and run the whole hideous construction with a ray of hope and a couple of environmentally-friendly solar panels. All this from a company you will probably never have heard of:

It is rather like the Archbishop of Canterbury asking Simon Cowell to give the Church of England a makeover. Except that Dr Jane Guise (Chief Executive of the Bath & West) would look ridiculous in the Archbishop's costume - and that the Chief Exec of London and Wharfedale is certainly no Simon Cowell.

Mr Cowell is a multi-millionaire with a cheesy grin

Richard Froggatt, on the other hand, runs a firm with few connections in London or Wharfedale and very little in its annual accounts either.

What on earth is going on? 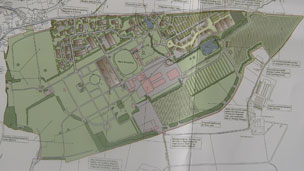 It may all look wonderful on paper, until you examine the completely unchanged existing showground and the total lack of parking facilities - yes, there will be 790 spaces to serve the new shopping centre, but where in the name of sanity are the Bath and West Show goers meant to park?

The "charitable" society that runs the Bath and West calls it 100 acres of opportunity. London and Wharfedale have an eye on the £120 million it will cost.

If you dont, tell me instead

But don't worry too much. It is extremely unlikely these grandiose plans will ever materialise.