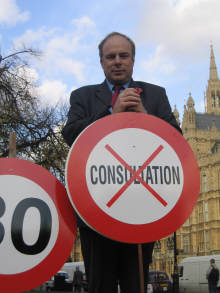 TEXT OF SPEECH BY IAN LIDDELL-GRAINGER MP in support of his LOCAL GOVERNMENT CONSULTATION BILL on Wed. Oct 12th 2005.

(but it equally relevant now!)

' Every weekend I consult my constituents. I consult my office, my family, the butcher, the baker, even the candlestick-maker  -  when he’s not up to his wick in wax ! I don’t have to take a blind bit of notice of any of them. But we like to consult, don’t we? We like to go through the motions of seeking opinion. We may not be convinced by all we hear, but at least we’ve bothered to ask.As a matter of fact I am a committed advocate of consultation. But I want it to mean something. I want the people who give us their views to know that we’ve taken notice and – perhaps – adopted some of their ideas. I want consultation that really works – and that is what this Bill is all about. Consultation has become a ludicrous buzzword. The Government swears by it. Right now there are 205 different consultations under way about new Government plans. Those of us with strong opinions and ample time are absolutely free to contribute our own thoughts to all these debates. There is one small drawback. Consultation does not involve any debating at all. The public is invited to pour in opinion, which can then be conveniently plagiarised, twisted or completely ignored.And the scale of the consultation industry is rather like the old maxim: divide and rule. There are now so many official consultations that it is well nigh impossible to keep abreast of them – let alone attempt to contribute.In addition to the Government’s 205 open consultations….which I learned about from a Government website expensively devoted to listing them all…..there is also an even bigger list of Government “closed consultations”. Let me give you an example. The Health and Safety Executive is currently consulting about some new rules called the Vibration at Work Regulations. My office in this building happens to be directly underneath Big Ben. I therefore consider myself to be something of an expert in Vibration at Work. But under the rules that govern “closed consultations” I am not, apparently, expert enough. My entire body may shake uncontrollably whenever the clock strikes the hour, but as far as the Health and Safety Executive is concerned I can get knotted. Such are the small complications of consultation. The big complications, however, are much more serious. Consultations are voluntary. Consultations are not binding. Consultations, sad to say, are sometimes unworthy of the very paper on which they end up being printed. And making sure that consultation takes place at all is left to that toothless instrument of political persuasion the vague, woolly and completely unenforceable “Code of Conduct.”Imagine where poor old Moses would be today if God had handed him a Code of Conduct rather than Ten Proper Commandments.  “Thou Shalt Not Covet Thy Neighbour’s Ass” has much more of a ring to it than: “Perhaps it would be better to leave the livestock alone”. But if you want to examine the very William Shakespeare of Codes of Conduct then I invite you to scrutinise the Code devised by those matchless boffins of blether and bureaucracy…..the Cabinet Office.

Code 1. Consult widely throughout the process, allowing a minimum of 12 weeks for written

WHAT DO THEY MEAN BY WIDELY ? EVERYONE? ALMOST EVERYONE? A CHOSEN HANDFUL?

Code 2. Be clear about what your proposals are.

THAT’S A NOVEL ONE….CLARITY IN GOVERNMENT !

Code 3. Ensure that your consultation is concise and accessible.

Code 4. Give feedback regarding the responses received and how the consultation process influenced the policy.

WHAT SORT OF FEEDBACK ?

Code 5. Monitor your department’s effectiveness at consultation, including through the use of a

IN OTHER WORDS HIRE A FEW EXTRA CIVIL SERVANTS

AND WHERE WOULD WE ALL BE WITHOUT A FEW REGULATORY IMPACT ASSESSMENTS!!!

But what the Cabinet Office does today our local authorities are encouraged, cajoled or pretty well forced to do tomorrow. That is the real problem. Codes of Conduct are spreading like topsy. Consultations are bursting out everywhere about everything. They generate mountains of paper, are not legally binding and there are no set standards whatsoever. Before the last General Election – the only bit of recent genuine national consultation in this country - I argued in my constituency that we could do with some proper consultation whenever controversial schemes are proposed by local authorities. I had in mind the issue of West Somerset District Council and its plans to shift offices and redevelop land. Months later the discussions about those plans are still going on. I am certain there would have been far fewer grounds for argument and anger if the council had consulted people fully from the start.

First we need a decent definition of the word itself. The Pocket Oxford Dictionary suggests the following meanings: “seeking information or advice…..taking into consideration the views of people….considering feelings” I am quite sure every planner and politician in the land would endorse such sentiments and vow that consultation is a splendid part of the process. It is like motherhood and apple pie - you couldn’t possibly disagree with the general idea. But with such a woolly meaning, consultation can be as good or as bad as planners and politicians prefer. The trouble is that too many planners and politicians are prepared to settle for the barest minimum when it comes to standards of consulting people. The blame lies, I am sorry to say, right here at Westminster. This House has always fought shy of spelling out what consultation should be…..how local people are to be canvassed, how views are to be assessed, what account is taken of opinions, how many meetings will be held…….The remit to consult is certainly written into all local government legislation, but the dotted eyes and crossed T’s have always been left to the locals and their Codes of Conduct. Basically this House has copped out. My Private Members Bill is designed to establish effective procedures by which all councils must consult the public in future. It will no longer be good enough for the Transport Authority to insert a tiny notice on page 103 of the classified ads in the local paper telling everyone that such-and-such a road is about to be closed or widened or re-rerouted or subjected to a half-baked new traffic management scheme.  Under this Bill the nature of proposals has to be crystal clear and advertised so that people can see them, understand them and respond to them. Under this Bill local authorities will have to go out of their way to let people know what they’re doing. The Bill will specify precisely how far out of their way they will have to go. Critics might say that it will cost money. In the short-term, yes, there will be costs. But paying for sensible minimum standards  -  specified high-profile newspaper advertisements, intelligible letters to householders, public meetings and the like – is surely going to save far more money long term.If planners and politicians listen to local opinion first and take action based on what people really want rather than what the town hall thinks they want it can only lead to better decision-making.The inspiration for this idea was not merely born out of the confusion in West Somerset. I can cite hundreds of examples from up and down the country where local authorities have paid lip-service to the concept of consultation and reaped the consequences of unpopularity thereafter. Perhaps the most obvious local example was Somerset County Council’s ill-fated road speed management policy. It was conceived with the best of motives – to cut accidents and save lives. But it was executed with unseemly haste and resulted in a forest of unnecessary speed limits and hundreds of ugly new signs. The cost was huge. It might not have mattered if the scheme had made a meaningful contribution to road safety. But it didn’t. Some of those silly road signs caused more accidents than they stopped. Eventually common sense prevailed, the ruling Liberal Democrat group on the County Council was persuaded to do some decent consultation and many of the stupid signs were removed. If only they’d asked people first. The tragedy is that the local authorities are not doing anything wrong. They are obeying the law as it stands. But the law as it stands is legless legislation. The law leaves interpretation of the word “consultation” purely to the town halls. My Bill spells it out. My Bill has the support of MPs from all parties at Westminster. My Bill makes sense. And I commend it to the House. '