It took less than one calendar month to get some sense installed in the Department of Education. Today Michael Gove gave a little. Chilton Trinity, Elmwood and Robert Blake schools in Bridgwater WILL go ahead! This is tremendous news for the schools, the staff, the parents and the pupils. It is also a tribute to the unified campaign which has spread throughout the area. But its not over yet. A very large question mark still hangs over the three remaining schools which are now to be reviewed "later" according to the Government - Haygrove, East Bridgwater and Penrose. If this is an attempt by Mr Gove to compromise with me (save three, scrap three) then he can stick it up his portfolio. These three schools were and are just as ready to go ahead as the three that have now been safeguarded. All the money was coming from private finance sources so it wouldn't have cost the taxpayer a bean. The fight for these schools is still very much on.

He didn't know because, apparantly, he hadn't been told (or correctly told) by Departmental officials.

Mr Gove has now agreed to think again about his plans. I left him in no doubt about the plight of the schools themselves, the reaction of Bridgwater people and the real possibility of a mass lobby of Downing Street. He only has to pick up our local paper to witness the fury: 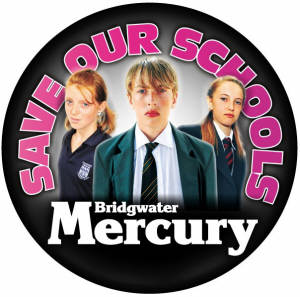 He wants to save money by getting rid of Labour's scheme to build schools for the future. Cutbacks were inevitable. But we all believed that the hard work undertaken over many months by all the schools involved would have been enough to prove the case. Some of the building work has already begun. It is senseless to throw the whole effort away. I believe that our town won the argument and ought to win the money to provide good education in up-to-date buildings. This is what we have to live with in some schools - makeshift classes, ancient buildings and poor facilities for children who deserve better.

Everyone agrees that the only way to breathe life into the economy is by providing better products and better people to produce them. That is why education is so important. That is why I intend to argue Bridgwater's case long and hard. This is NOT the end of the fight. This is just the start.

I raised the issue of the threatened Bridgwater Schools in a special debate on July 13th which was primarily about Hinkley power station. Please read what I said: