HINKLEY C GETS THE GREEN LIGHT

In wintry winds the Prime Minister's helicopter touched down at Hinkley this morning. But Mr Cameron was determined to get to the site to break the news. Hinkley's future as the first of a new generation of nuclear power stations is now secure thanks to very large investment from the Chineses nuclear industry and a fairly negotiated "strike price" to reward EDF for its long term commitment to the whole project.  At last the funding is in place and the agreements have been signed. So the real work to tranform a corner of Somerset into the new power house of Hinkley C can begin in earnest.  This is an important day for Britain's energy.  The ceremonials at the site are just the beginning. But much hard work has already been done. The planning process is complete. The sceheme for compensating communities is in place. The building work is ready to roll and the job opportunities it will all bring to Britain are already being recognised. Mr Cameron today spoke of 25,000 new jobs from the nuclear future this decision heralds.  It also means a very great deal to Bridgwater, West Somerset and all of us. I was thrilled to be at the ceremoney. I will be even happier when Hinkley C opens for bsuiness with the first power generated in around ten years from now.

There is, at last, a generous agreement for community benefits that will be paid to compensate local people for the long term life of the new power plants.

It has taken a great deal of time to negotiate, and it will not mean instant money - not until Hinkley C is up and running- but at least the framework is now definite and in place.

“New nuclear will have a central role to play in our energy strategy, providing heat and light to homes across the country.

It is absolutely essential that we recognise the contributions of those communities that host major new energy projects". 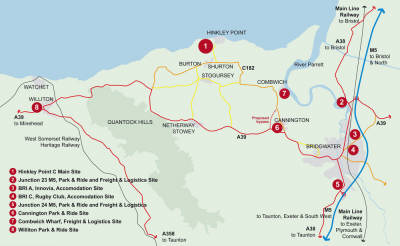