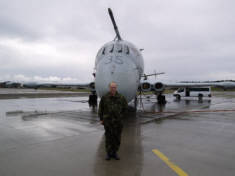 An independent review into a fatal 2006 Nimrod crash has blamed a "failure of culture, leadership and priorities", the defence secretary told MPs today. The report found the MoD and RAF had allowed safety to suffer in pursuit of financial savings, Bob Ainsworth said. Fourteen crewmen died when the aircraft blew up after air-to-air refuelling over Afghanistan when leaking fuel made contact with a hot air pipe. Report author Charles Haddon-Cave QC also criticised two RAF officers. See more:

The Defence Secretary finally makes a statement after the long drawn out Board of Inquiry into what happened aboard an RAF Nimrod over Afghanistan. It wasn't shot down. It wasn't pilot error. There was something fundamentally wrong with the plane's complex refuelling system. Something that had occurred before to other Nimrods and been warned about before. The fire and crash that followed killed everyone on board, including my own constituent Sgt Ben Knight. It was the kind of tragedy that should never have happened or been allowed to happen. I have no criticism of the thoroughness of the Board of Inquiry's deliberations. I wish they had found time to meet the familes and to brief them fully BEFORE the report was published. But my anxiety is now reserved for the future.

The Defence Secretary ordered a fresh inquiry into the "airworthiness" of the whole Nimrod fleet - despite assuring the House that the planes remained safe to fly. Safety improvements were promised.

But in March 2009 the Defence Ministry grounded most of the fleet.

The six Nimrods operating in Iraq and Afghanistan will be withdrawn from the end of the month, and six others prevented from flying. The half dozen that have already been modified will be kept at home to monitor British airspace.

Nimrod was developed from the civilian Comet airliner which was removed from service after a number of fatal accidents. It is a different and much improved aeroplane, but it is also very old. Successive governments have shied away from investing properly in a successor. The long awaited replacement reconnaissance aircraft - son of Nimrod - is still being tested. But it precisely that - a Nimrod look alike - brand new, but still a Nimrod.

In the world of Civil Aviation the existing Nimrod aircraft would never pass the current safety tests and earn Operational Certificates. Civil safety is priced higher than Military safety. This should not be so. For a decade many of the major defence manufacturers have been arguing with the British Government for a new system that treats Military aircraft in exactly the same way. Europe wants to see a Military Aviation Authority. Many countries have already agreed. Britain stands against it. Britain - or at least the British Government - is quite wrong.

Sgt Ben Knight and his comrades joined the RAF to serve their country. They knew they would sometimes face danger. But they had every right to expect that the government would do everything possible to protect them. It will be a tribute to their bravery and an act of overdue common sense for the British government to face the challenge now and raise military safety standards in order to stop the risk of another accident. I have twice been to meet the RAF crews serving in Afghanistan and also visited their base in Scotland. They are dedicated professionals and extremely resourceful. It has been by their own ingenuity that Nimrods remained airborne at all. We owe them all a debt of service and gratitude. I will continue the fight.