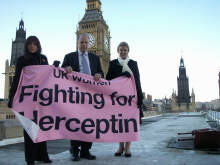 BARBARA CLARK IS NOW IN "REMISSION". SHE HAS BEEN TAKING HERCEPTIN FOR FOUR MONTHS AND DURING THIS TIME THE CANCER HAS NOT ADVANCED. THIS IS TREMENDOUS NEWS FOR BARBARA AND A HEARTENING RESULT FOR HUNDREDS OF OTHER WOMEN WHO MAY BE ABLE TO GET HERCEPTIN FROM THE NHS AS A RESULT OF OUR JOINT CAMPAIGN.

Barbara's breakthrough came in October 2005 when her local Health Trust relented and agreed that she could now be prescribed this expensive new drug that could well save her life. This was a crucial turn in a story that has made Barbara front-page news. She is a fighter. So am I. Together we got something done. It is not an outright victory against the postcode lottery of the NHS. But it is a real start. What follows is the background: 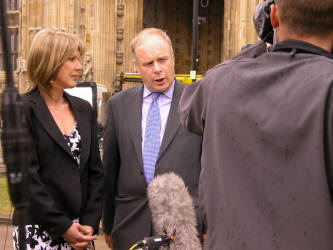 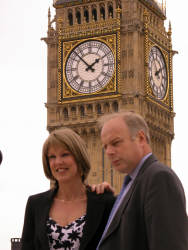 Barbara is an extraordinary human being with a welcoming smile and an easy manner. She was a nurse. I reckon she must have been a super nurse. Actually she still is, looking after her family as though there was nothing wrong; helping friends and neighbours too. Before long we were chatting in her home like old pals. Even laughing. Coping with cancer always demands courage. Every day is a challenge. There are so many fears to be conquered. And the treatment is never a treat….. to lose a breast in surgery…. to lose your hair after chemotherapy….and always knowing that ultimately you may lose life itself. Barbara is remarkable. She has bravery by the bucket-load. She also has the sort of determination that makes your hair tingle. She will NOT take NO for an answer. I admire that. So now I’m fighting alongside her. Every year in this country forty one thousand people are diagnosed with breast cancer. Not just women.  The annual statistics include three hundred men. In bygone years the disease was regarded as an automatic death sentence. Now regular screening and rapid treatment has radically improved the prospects for a majority of patients.

MAY 2006 - HERCEPTIN GETS THE GREEN LIGHT IN EUROPE FOR THE TREATMENT OF EARLY STAGE BREAST CANCERS....UK LIKELY TO FOLLOW ! 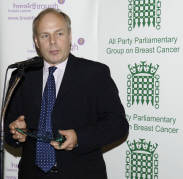 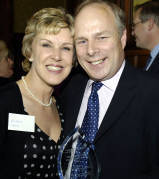